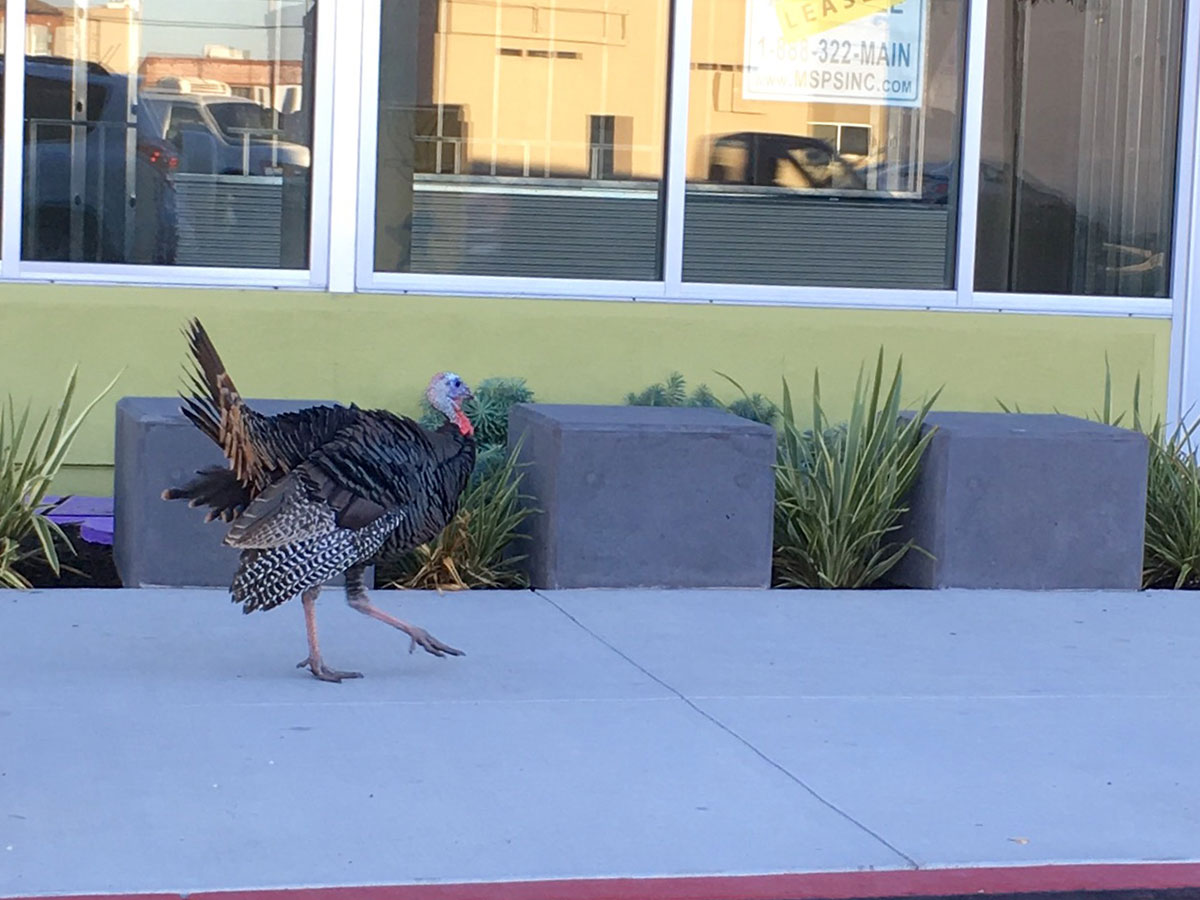 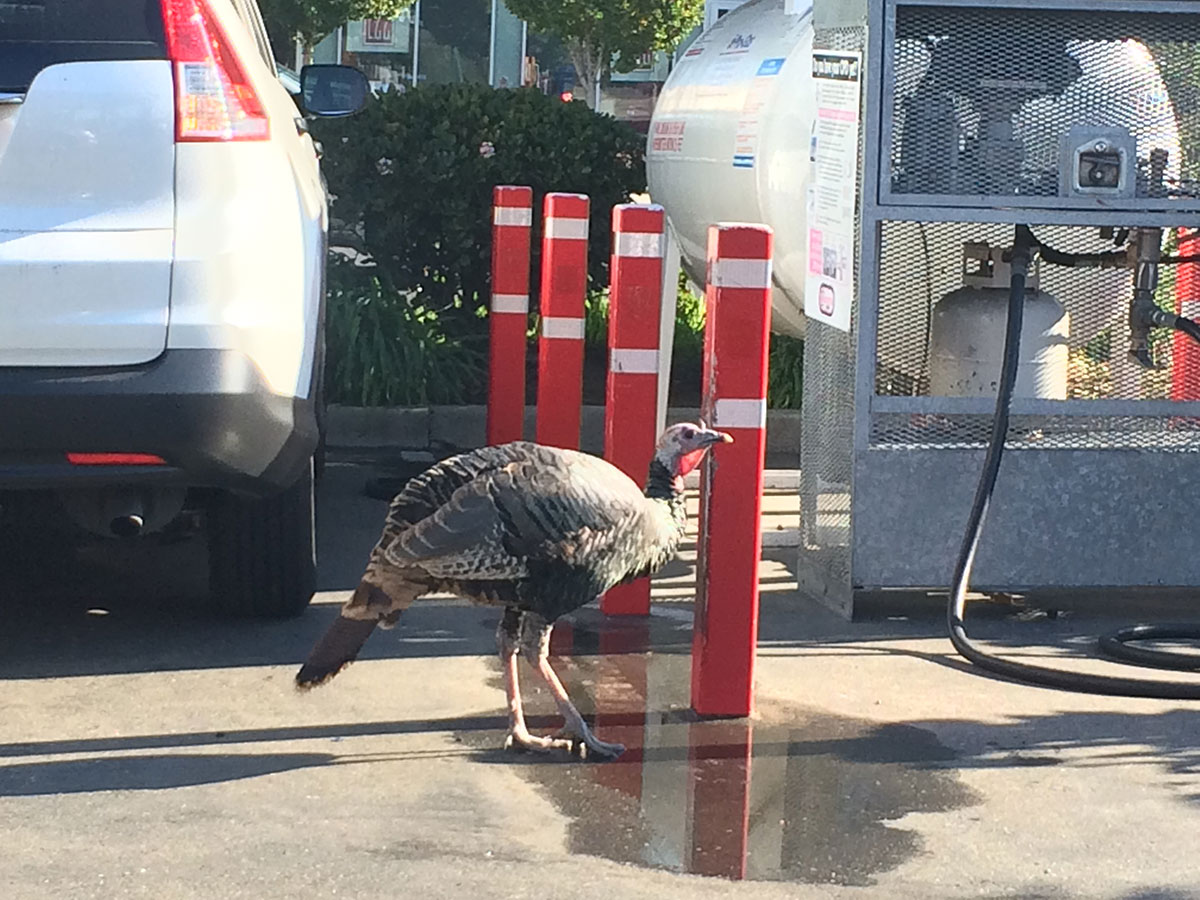 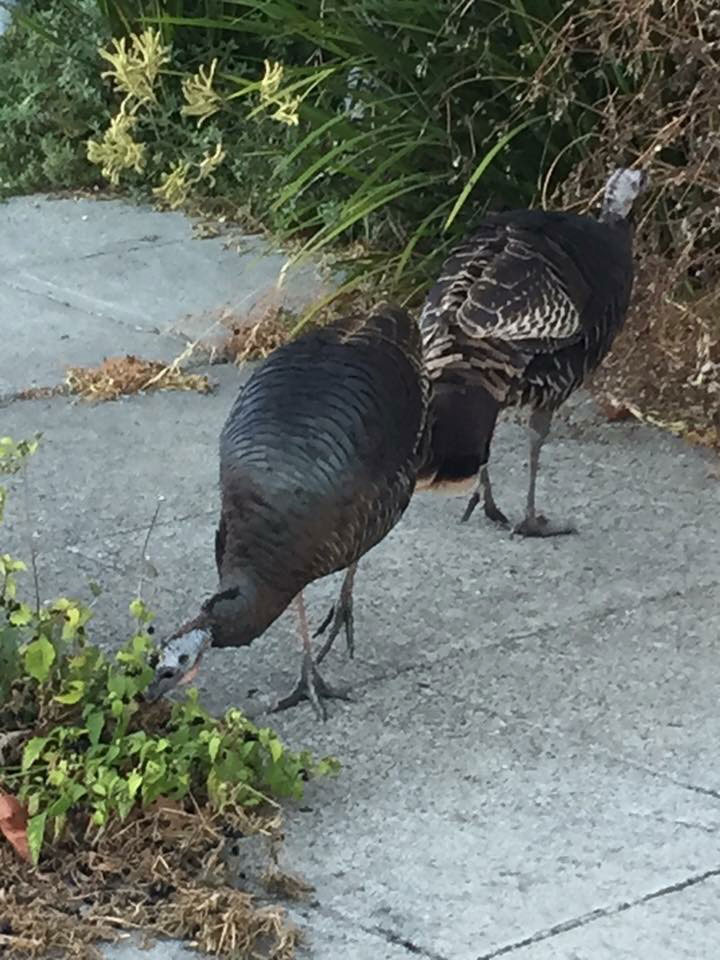 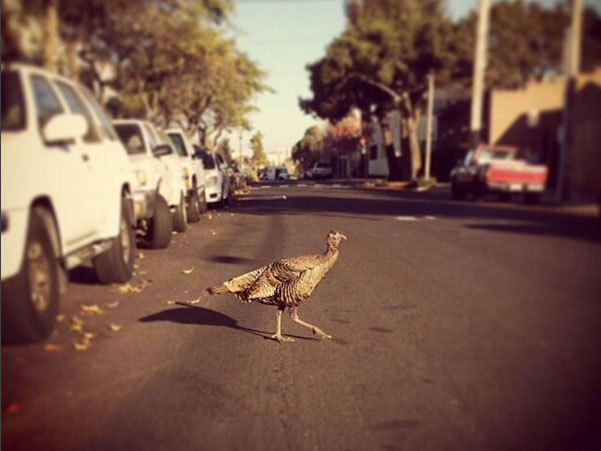 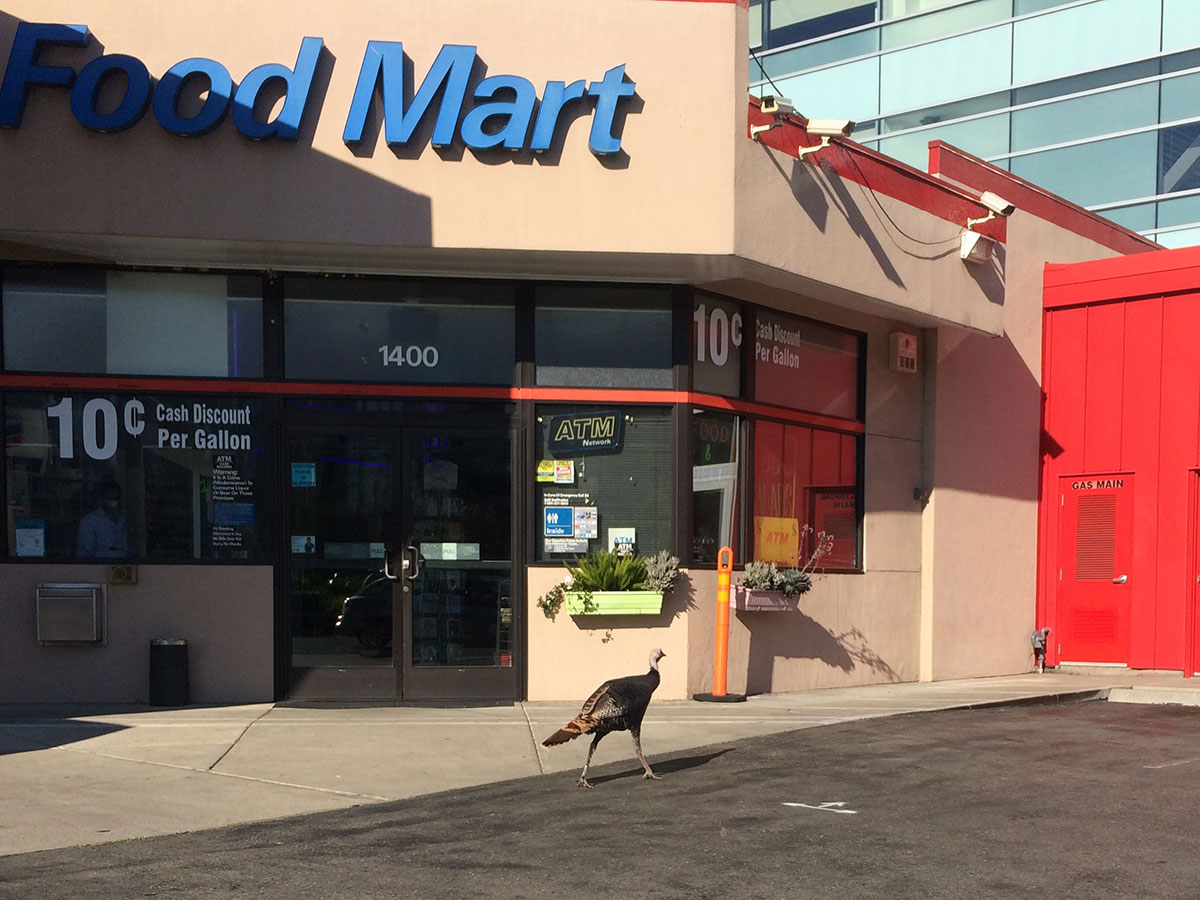 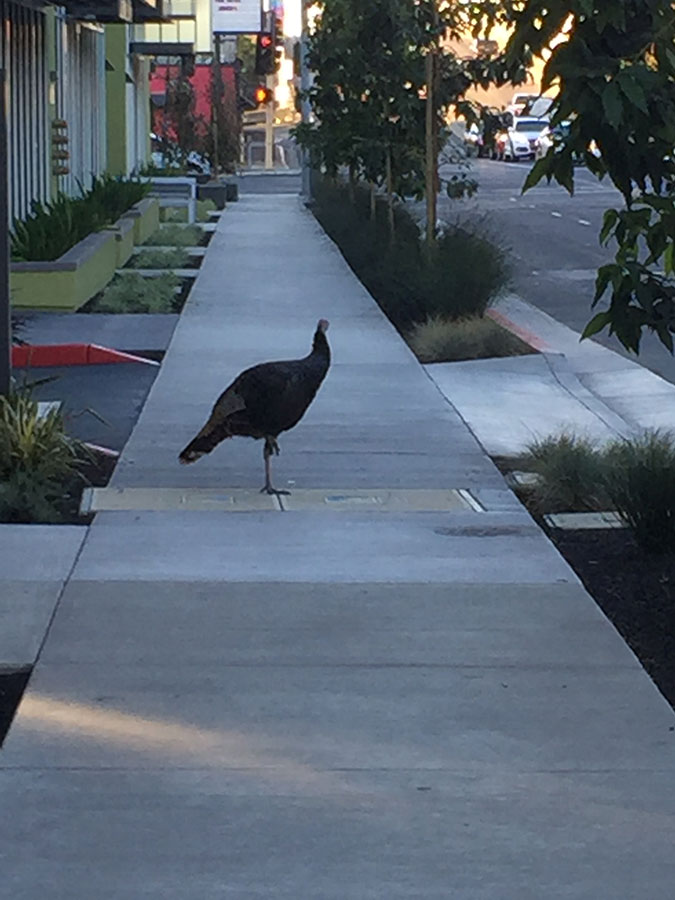 Some sad news reported by EPD Chief Tejada at Tuesday’s Council Meeting as one of our famous Emeryville Wild Turkeys has passed. It had nothing to do with Thanksgiving though, the jaywalking bird had apparently suffered an injury and then expired while in Police custody. EPD Officers had affectionately named him “Jerry”.

“The urban environment finally got to him” noted Tejada. “He died in the arms of two of our officers”. Reports by residents of the Turkey brazenly crossing major intersections of Powell between Hollis & San Pablo were frequent. Apparently the Turkeys luck finally ran out. Jerry’s case is not being investigated for any “foul” play (too soon?).

“Jerry” perched up on the roof of Honor Kitchen & Cocktails (Photo: @ro3SF)

Jerry was reportedly injured with a broken leg more than likely from being struck by a vehicle. He was exposing himself to further peril by wandering around the busy intersection of Powell & Hollis during evening commute hours. Piedmont Animal Control was dispatched on Monday to capture the bird, but was unsuccessful (Emeryville contracts out their Animal Control services to Piedmont). On Tuesday, a motorist successfully captured him on the top of the Powell Street Bridge overpass using a bird net and towel. The EPD and Animal Control arrived at the scene, but Jerry died shortly thereafter either from his injuries or possibly as the result of stress from the incident.

“No one really knew how the bird died but he was cared for properly during his final moments” noted evening Sergeant Robert Alton. According to Animal Control, it is not uncommon for Wild Turkeys to die from stress-related heart attacks. The red-colored wattle or “dewlap” and fullness of feathers indicate that Jerry was male and was estimated to be at least four feet tall.

Residents are generally delighted with their sightings although a few have noted that they can be a bit menacing. “it just raced me down San Pablo with a harassed look in its eye” noted one resident through email. “We get calls almost everyday around this time of year mostly around San Pablo and Powell. Mostly people are worried about them getting hit and we’ve never received a report of them attacking anyone” noted Piedmont Animal Control Officer Monica Hueston. “They are not aggressive by nature and, in fact, are quite trainable!” Male Turkeys, referred to as “Gobblers”or “Toms”, can act a bit more aggressive during the Spring mating season though but it’s mostly for show.

Nearly 50 million turkeys are served up every Thanksgiving but don’t get any ideas about replacing that Butterball with a wild turkey this holiday. “They are protected from hunting and the ‘gamey’ flavor would be different from what you’d expect from a store-bought Turkey” noted Hueston.

Most of the Wild Turkey sightings have been concentrated around the Powell/Hollis intersection but there have been sightings at Temescal Creek Park, The Park Avenue District and as far as IKEA. Sightings of multiple Turkeys give us hope that Turkeys will return to Emeryville. [UPDATE: Multiple readers have confirmed a Wild Turkey sighting since Jerry’s passing so it appears he was not acting alone.] One theory of their increased sightings is that they’re drawn to the seeds intended for pigeons and pet food bowls. Increased sightings of Wild Turkeys and other animals including foxes, skunks and raccoons can also be attributed to the scarcity of food exacerbated by the ongoing drought. “We’ve gotten reports of gangs of as many as eight.” (A “gang” is of course a technical term for a group of Turkeys.) “They’re more ‘urbanized’ and since they have no natural predator, and they don’t scare very easily”.

Jerry sightings had become a regular topic on Social Media and had endeared themselves to residents. “We call him ‘Lucky Franklin’ ” noted one resident on Nextdoor.com. “for Ben Franklin who thought the wild turkey should be our national bird“. There was no public consensus for the name of the Turkey and many others were recommended via Social Media. It seems appropriate that we honor the life of our feathered friend with a community poll (I think we can safely remove “Lucky” from consideration). We had to of course throw in a Pixar reference.

9 Responses to “Jerry” the Emeryville Wild Turkey succumbs to injuries

» Question 20 response is quite ignorant of the existing built......

Brought to us by the party that claims their spending plan "costs zero dollars" » According to the mailer all 4 current candidates trust Courtney......

"Maintaining a financially solvent city" by ........ » "I also don’t believe that there should be legal consequences......