The ongoing debate of disposable and one-time use products is getting more attention these days. Some local municipalities like neighboring Berkeley are looking to curb use by banning single-use straws and adding a surcharge to take-out food that is generally packed in a mound of plastic containers, bags and utensils.

One Emeryville company is looking to permanently change the way we think about disposable products and make a lifestyle choice that involves “rethinking” plastic.

Emeryville-Based Stasher Founder/CEO Kat Nouri immigrated with her family to the Bay Area from Iran when she was ten. Kat is ‘East Bay’ through and through with a degree from U.C. Berkeley and home in neighboring Oakland.

Nouri sharpened her marketing prowess working for IBM out of college where she met her now husband. She rounded out her entrepreneurial toolbox while working alongside him at his semiconductor manufacturing business doing everything from sales & marketing to distribution and accounting. Nouri tapped into her ‘creative side’ on the side by learning ceramics and floral design.

In 2005 amid a “year off” to be a mom, Kat leveraged her knowledge of manufacturing and eye for design to found Modern-Twist. Modern-Twist designs and manufactures 100% food-grade silicone products including placemats, coasters and kids/baby products. Her knowledge of working with silicone products laid the foundation and forged the relationships that eventually led to the creation of Stasher.

As she continued raising her family of three, like many of us, it raised her consciousness level. She was buying organic produce, cooking homemade meals, but she couldn’t help but take note of all the plastic that her family was throwing away. “What’s happening to all the plastic in the world?” Nouri noted at her Park Avenue headquarters over a slice of Arizmendi Pizza and some homemade lentil soup. “I don’t want my kids to grow up in a world with all this plastic in the oceans.”

Kat plunged her Modern-Twist profits into starting Stasher. Nouri worked for four years to perfect the design of Stasher’s patented self-sealing closure with her silicone manufacturer.

Her first product debuted at the International Houseware Show in Chicago in 2016. They took home the Global Innovation Award followed by the Red Dot Design award. Inc. Magazine anointed them as one of the seven most ‘brilliant’ product design of the year. Soon after, they inked a distribution deal with The Container Store.

“We really hit the ground running and it has been explosive since,” noted Brand Director Katie Reinman. “There are lots of reusable bags out there but they don’t have the same functionality as Stasher.”

Stasher even made a recent appearance on Shark Tank convincing Mark Cuban to invest $400,000 in them.

The key to Stasher is not just the design, platinum-grade silicone and premium feel of the material, but the benefit. Unlike some disposable plastic bags, there are absolutely zero chemicals, fillers or petroleum by products and they can be heated without leaching harmful toxins.

Stasher bags range from snack-size to half gallon-size and are the only bags on the market that are oven, dishwasher, microwave, fridge, freezer, stovetop and sous-vide safe. Kat sees the applications of Stasher as limitless. From breast milk to Cannabis storage.

When a Stasher product hits the end of its lifespan, it is recycled into pellets for kid’s playgrounds to ‘complete the circle.”

Like any first-to-market product, preventing copy-cats is an ongoing battle for Stasher. Nouri has worked hard to protect and defend her intellectual property through domestic and international patents.

The company has seen continued success with expanded distribution at Sur la Table, Amazon, Whole Foods as well as favorite local outlets like The Berkeley Bowl. They recently inked a coveted deal to be sold nationwide in TARGET stores. Nouri remains particular about who sells her products. “The ‘no’s’ are just as important as the ‘yes’s’ when it comes to your brand,” she attests.

Needless to say, their small Emeryville office is bursting at the seams with their current eighteen person staff. Kat notes that they love being in Emeryville and hopes their rapid expansion can keep them here.

At the foundation of Stasher, according to Nouri, is their strong mission. They are a Certified B-Corp, Green Business, WBENC Women-Owned business and they proudly support causes like 1% For The Planet. Nouri is also involved with Inner City Advisors who work to hire people from the community.

Kat wholly embraces the bigger impact, “It’s not the product itself, it’s the movement. People are really excited that there’s an alternative to plastic that actually works and that they can get behind.”

Huge shoutout to the folks at @moderntwiststudio for their hospitality and generosity today. #Emeryville is filled with dynamic companies whose products we use everyday like Modern Twist’s innovative @stasherbag. Spotlight forthcoming!

As a Bay Area parent and devoted recycler, I discovered Stasher while looking for solutions to decrease my family’s ecological footprint. I’ve since purchased many more and have made a conscious effort to reduce our use of single-use packaged products. Companies like Stasher are making it easier for hard working Mom’s and I’m proud that they’re in our own backyard! 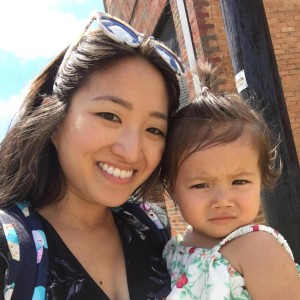 grew up in the Bay Area but has spent the last seven years in Emeryville. All of her major milestones have happened in our city, including getting engaged, married and becoming a parent to three babies (one furry mutt, Mox, and two kids, Izzi and Vinny). Her entire gang can often be found at her favorite local spot, Doyle-Hollis Park.