Some extremely sad news for E’villains and the Emeryville Small Business community as Commonwealth Micropub on Adeline announced their abrupt closure last Saturday December 19th. Barely nine months from their Grand Opening back in March, they deemed the Triangle neighborhood British-style Gastropub unsustainable and have decided to close their doors for good. “For any number of reasons, the concept did not meet the demand we anticipated for our efforts to be sustainable” noted Ross & Ahna Adair through a press release.

Commonwealth was every bit the example of an establishment that E’villains wanted. A Family owned establishment that made our city more vibrant, more bikeable, more pet-friendly, more livable. They took a huge personal financial risk on an area that desperately needed a locally serving establishment and sadly, our city could not support them. So what went wrong? Is the City of Emeryville just an overall inhospitable environment for small business … or are there other factors? To say their failure was strictly because of our recent adoption of the highest-in-the-nation Minimum wage ordinance would be reckless, but to say it had nothing to do with the MWO would be naive. 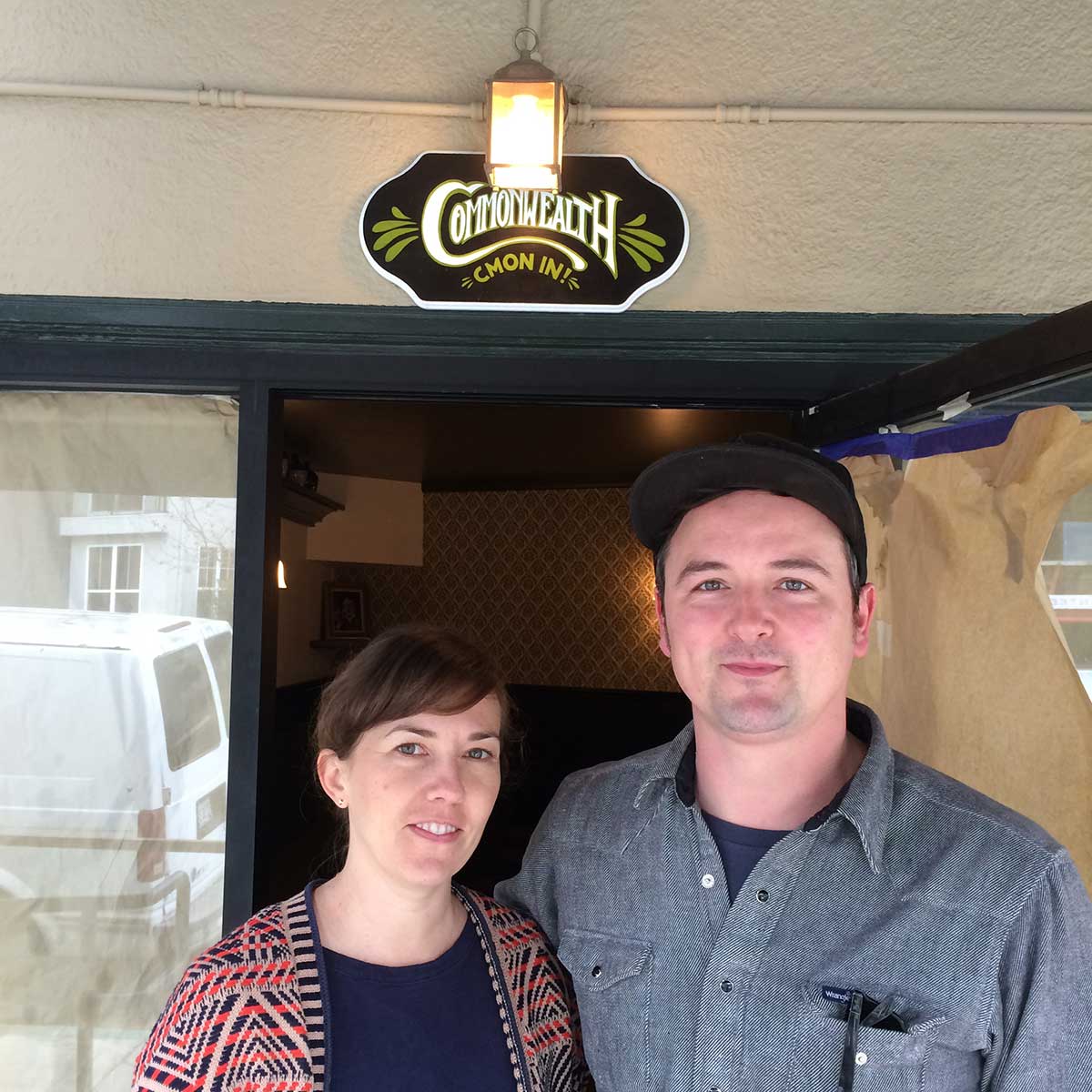 Through a Press Release, Ross & Ahna made the following announcement:

With a mixture of sadness and relief we are announcing the closure of The Micropub at 3986 Adeline St, Emeryville for the holidays and into the New Year. Saturday, December 19th will be the last night of service. For any number of reasons, the concept did not meet the demand we anticipated for our efforts to be sustainable.

We are extremely grateful to our staff and to all who enjoyed and supported our wee pub this year.

We are actively seeking an alternative solution with the hope that the community can enjoy the space again in the near future.
In the meantime, The Micropub will continue to be of use as our commissary kitchen for our original location. We look forward to seeing you here on Telegraph soon.
We are also available for hosting private events and pop-ups on Adeline until further notice, and would love to hear from you. Please email info@cmonoakland.
Cheers,

After operating a successful Oakland location on Telegraph for nearly five years, Ross & Ahna decided to bring their formula to Emeryville announcing their intent to open a Micropub version back in June 2014. The area has been a challenging one, and the previous two businesses at that location have not survived (Furenzo & Cafe Bier). But with three new nearby high-density developments in tow and a thriving local economy, neighbors were optimistic that the area was ready to support a local pub. They were confident enough that they’d be open by the end of the year, their outdoor sign was painted with an “EST. 2014”. Issues with the building’s infrastructure and permitting ended up delaying the project till March of 2015. Even Emeryville’s first Bike Corral that the city touted was overbudget.

Two months prior to opening, the new progressive City Council majority announced their intent to fast-track their highest-in-the-nation “living wage” increase. Ahna reluctantly supported the minimum wage in this May 2015 SF Business Times article noting “I am a little nervous on how quickly we get from $12.25 to $15.” (Emeryville will have nearly annual $1 phase-ins for small business putting them on a trajectory for $16/hr. by 2019). “Our employees are our greatest asset, and If we want to grow our community, we have to make our jobs better jobs” she explained. “The big fear is whether our customers will come with us and see it through. Doing the right thing shouldn’t put us at a competitive disadvantage” noting the relationship between labor, prices and volume of business.

Like many restaurants now attempting to mitigate the impact of large minimum wage increases, Commonwealth embraced a tipless model out of the gate (Under state law, tips cannot be credited toward the minimum wage). Under a tipless model, restaurants shift money previously paid by patrons as tips into the bill itself by raising prices. This revenue can then be used to help meet the employer’s rising wage obligations while providing a more consistent, though potentially lower, paycheck to previously tipped staff.

Commonwealth embedded a 20% gratuity in the price. Now if you generally already tip 20%, you would effectively be paying the same … but the menu prices can apparently cause “sticker shock” to some patrons and some have noted that it ultimately discourages repeat business. Bucci’s (another recently shuttered Emeryville establishment) experimented with a service charge but reverted back to the traditional model after customer complaints. Bucci’s of course had the luxury of a loyal customer base from their 28 years in existence. Eater SF also theorized that the tipless model may have contributed to Commonwealth’s demise.

The tipless model is being trumpeted as a way to more evenly distribute revenue between the front of house (servers, bussers & bartenders) and back of house (Cooks, food prep, dishwashers). Needless to say, most waiters I’ve spoken with despise it and businesses I’ve spoken with note it’s a harder sell to attract top waiting staff.

Chronicle Food Critic Michael Bauer came out in support of the tipless model in this October Piece observing how many restaurants in cities that have raised their minimum wage have embraced it. Most of the examples he referenced were more fine-dining establishments. “It’s appealing for the same reason as Uber– because it cuts out the guesswork and makes it easier for customers” he noted. The East Bay Express Food Writer Luke Tsai wrote a very thorough piece titled “The Tipping Point” back in February 2015. Some notable establishments have scrapped the tipless model after trying it citing staff retention.

What’s not clear is if this model can easily be replicated anywhere or if we have to wait for this “cultural shift” to take root. Some areas can get away with higher prices when they have other advantages such as being in a bustling district or near a major transportation hub. Commonwealth was a bit more of an outpost. The area is changing rapidly, but apparently not fast enough for Commonwealth to survive.

This was a noble move but it was unclear if the dining pubic was prepared to absorb the higher costs that come with the dramatic overnight wage increase. One only needs to scroll through their Yelp reviews to determine that the restaurant goers might not be prepared to personally foot the bill for these large wage increases or understand the correlation.

This review narrative doesn’t seem to exist in the Oakland establishment’s Yelp review section where they do not apparently have a tipless model.

So despite overall very favorable reviews of their food, ambiance and service, it seemed repeat customers were lacking. Shortly after their opening, they ceased brunch service amid rumors that they were struggling and even looking to sell.

Which Small Businesses in Emeryville will remain viable?

Adeline neighbor Baseline Produce (on the Oakland Side of the border) also recently shuttered (more to do with their inability to obtain a license to sell beer & wine I’m told). It has to be concerning to in-the-works Propaganda Gastropub, neighboring Scarlet City Espresso and Basic Cafe (although Propaganda will have the benefit of serving hard alcohol and its higher margins).

As a fervent supporter of small business in our town and as someone who has championed their plight, it’s absolutely heart-wrenching to witness the lack of support they received. The City of Emeryville (residents and city government) have a challenge ahead of us. We continue to reiterate that we want small businesses to thrive – but our actions and support seem to belie this notion. It’s unclear to me that the same people who are supporting higher wages are doing anything to actually support the small businesses that are directly impacted after the votes are tallied.

Commonwealth joins Bucci’s, E-22 Cafe, Coco Delice, the Bread Project among Emeryville businesses that have closed their doors or left Emeryville in 2015 (not exclusively because of the MWO). Yes, some establishments have decided to give it a go but I’ll reiterate that we won’t know the true impacts until small businesses are faced with $16/hr. in 2019 or our next economic downturn (whatever comes first). Sadly, I can guarantee this is not the last shuttered establishment I’ll be writing about in 2016. For now we’re left to ponder the darkened spot on Adeline. As Commonwealth’s Facebook Page aptly stated “We Hardly Knew ye …”

NOTE: We reached out to Ross & Ahna for further clarification on Commonwealth’s closure but they did not reply.

is a third generation Californian and East Bay native who lived in Emeryville from 2003 to 2021. Rob founded The E'ville Eye in 2011 after being robbed at gunpoint and lamenting the lack of local news coverage. Rob's "day job" is as a creative professional.