What is enduring about Tee Tran is his passion for family, employees and food. Because of his humble background, Tee truly believes that if you treat your employees and customers with respect, they will go the extra mile for you. It shows in the food and the atmosphere he’s created at Banh Mi Joint. Tee conquered Oakland with his traditional, but accessible vietnamese cuisine at Monster Pho. Now Tee is looking to conquer E’ville with a more contemporary Vietnamese food – Banh Mi.

Tran’s story is an inspiring one having escaped from his native Viet Nam with his family 1989. He spent two years of his childhood in refugee camps prior to arriving in Oakland with literally nothing. Tee’s mom worked four jobs just to keep the family afloat. Tee credits his mother and recent marriage to his wife Macy for grounding him and his work ethic. “She’s my rock” noted Tee about his wife Macy. “Without her, I would not be here today”. Tee’s original background is actually in auto sales, but he persistently made the transition to restaurateur in 2014 by opening Monster Pho near the Oakland Kaiser on Broadway. More of Tee’s personal story can be read on KQED’s Bay Area Bites.

Bánh Mì Joint’s (BMJ) menu offers starters including Vietnamese staples like spring rolls, pot-stickers, wings and vermicelli noodle bowls. The Spring Rolls are not fried, but use rice flour wraps instead. They are stuffed with a mix of beansprouts, lettuce, vermicelli noodles, mint, thai basil and your choice of either shrimp or tofu. It is accompanied with a side of a dipping sauce that tasted like peanuts, but yet, had none (like Monster Pho, BMJ is peanut-free to address the concerns of parents who have children with allergies). They were fresh, crisp and light on the mint. The whole roll was balanced. It’s not groundbreaking, but it’s done right.

“Bánh” literally translates to bread and “mì” translates to “wheat” and are generally a meat-filled sandwich served on a baguette. Banh Mi sandwhiches were introduced by the French during Viet Nam’s colonial period according to Wikipedia. The bread at BMJ is baked fresh daily. When the bread runs out, the bánh mì sandwiches are done (so get there early!). The bread was crispy, but not so crisp that it hacks the roof of your mouth raw which I appreciated.

The first thing I tried during the soft-opening was the Juicy Fatty Pork Banh Mi (thịt nướng). It was flavorful and authentic, with hints of fish sauce, sesame, and lemongrass. Although it did not have the “char” I was hoping for, it brought back fond memories of sitting outside a market in vibrant Ho Chi Min City, enjoying a sandwich after successfully haggling $2US off a knock-off North Face down jacket (yes, in a tropical country … but I digress). If you’re hungry, order two and if you are spice-adverse, check your sandwich for the hidden slice of jalapeno.

The next thing I tried was the vermicelli noodle bowl. The Grilled Marinated Chicken Noodle Bowl is a pretty solid deal around here at $10. It offers up a combination of warm rice noodles (perfectly cooked I might add), sliced cucumbers, crispy romaine, scallions, pickled carrots, daikon, and tangy vinegar-based sauce. The chicken, like the pork, had a hint of lemongrass and fish sauce. Very good, great aroma, but again, not the “char” I would expect. At first, I thought I would simply plow through this dish in no time, but it’s fairly substantial (my 10-month old had no problem helping me tear through it though).

Unlike its Monster Pho sibling, Bánh Mì Joint has a license to serve beer and wine. It boasts a few beers that I have only personally seen in Ho Chi Min City including “33 Export” and “Tiger” (IMHO bánh mì sandwiches taste much better washed down with a cold beer). They also offer cider and wine on tap. Outdoor, pet-friendly patio seating will be available once the repair scaffolding from the recent neighborhood fire is removed. We can’t wait for all the wrinkles to be worked out and we think BMJ will really enhance the neighborhood. 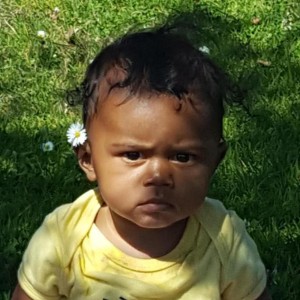