E’ville’s abuzz with Oscar news and yesterday Pixar folks celebrated the nomination of the studio’s Golden Globe-winning feature Inside Out. But perhaps flying under the radar was Nicole Grindle’s first ever nomination. Working quietly behind the scenes, the calm, easygoing producer partnered with director Sanjay Patel on his stunning short “Sanjay’s Super Team.”

Thursday, Jan. 14, 5:30 a.m. had been locked in her mind well ahead of time—ever since the seven-minute film was shortlisted for an Oscar. The dress, of course, has been the biggest concern, but the daunting stage, the crowds and the red carpet all loomed like an enticing, mercurial carnival clown promising chaotic frolicking and at the same time a nightmarish terror.

This is not her first time at the rodeo, but her previous trips to “Hollywood’s Biggest Night” as associate producer with Pixar’s Monsters University and Toy Story 3 were, as she puts it, “ride alongs”—she was in no danger of having to go on stage or speak in front of millions. “I didn’t have any nerves,” she laughs. “That’s really nice, you get to have all the fun.”

The clever and sweet short (now playing in theaters before The Good Dinosaur) tells Patel’s story of being a kid who loved TV and action heroes. The boy is juxtaposed with his father who worships at a TV-sized cabinet containing small statues of Hindu gods. The father’s meditation bell ignites a humorous sound war, which results in the father turning off the son’s TV and making him also sit before the shrine. A visually stunning, colorful, action sequence of fierce gods doing battle in the boy’s imagination follows.

An understanding is forged between father and son in the film’s touching ending. It wasn’t until the completion of the short that Patel actually unveiled it to his own father whom it is based on. “Out of the 20 years I’ve been at the studio, my dad has never seen any of the Pixar films I’ve worked on” noted Patel in this Pixar “For your consideration” Oscar pitch. “I was really nervous to see and hear how he’d respond to the medium, the content … the whole thing. Especially because it was a short that he was in!”

Grindle & Patel showed a screening of the film to Sanjay’s father whom the short is based on.

Tapping into the Zeitgeist

Grindle’s role as producer was, as she describes it, “the person who makes sure it gets done,” including handling the budgets, scheduling and navigating Pixar’s internal workings. John Lasseter, who co-founded Pixar (with Steve Jobs and Ed Catmull, formerly at Lucas Films) 25 years ago and who now oversees both Pixar and Disney Animation studios, saw Patel’s creative potential and invited him to pitch his idea. Grindle partnered with Patel to make the short, part of which, included vetting the film with outside consultants to “make sure we weren’t treading on any cultural or religious sensitivities,” she says.

In a year that the L.A. Times and the media are dubbing “all white … again,” Sanjay Patel is a welcome addition to the line up. Grindle insists that the film grew out of Patel’s life experience and not a desire to address the larger, first-generation immigrant issue. “Now that we’re out there in the world talking about it, he found he connected with all these people who have had similar stories even if they’re from different cultures,” she says. “It’s been really gratifying. It’s emotional when you work on a film that touches people that way. It’s why you get into this business.”

With comedian Aziz Ansari’s Netflix series “Master of None” gaining traction, it certainly seems that Pixar has hit a chord. “Suddenly we’re all … [in] the zeitgeist.”

Not Toying Around Anymore

The other disappointing revelation yesterday was once again the industry has not chosen to honor any women directors (and when it comes to cinematographers, forget about it). As far as directing goes, Pixar has followed suit, for the most part in line with the predominantly male world of animation and high tech. A few years ago, Grindle and a colleague noticed that the studio had no women directors or even any women on track to direct. The path to become a director at Pixar, she explains, is to move into leadership positions in the Story or Animation departments. “We have a lot of women producers. We have women in leadership in various realms, but we don’t have women who are directing films.”

Next week, the group will bring Canadian feminist gaming and media critic Anita Sarkeesian to E’ville for a talk at Pixar. Sarkeesian sparked a backlash among male gamers for her critiques of the portrayals as women in pop culture and video gaming. One male gamer was so enraged he targeted her in an online game called “Beat Up Anita Sarkeesian.” Her critiques on Hollywood’s exclusion of women in films and behind the scenes are equally thought-provoking. Along with bringing in women from the outside, Pixar started addressing the “implicit bias” with trainings for both women and men, and Grindle and other women began an employee group, meeting regularly to encourage women to work through the issues that are holding them back.

She says the prospects for women stepping up to the helm for upcoming short films, are “really exciting.” Adding, “we’ve had a lot of success with [women] stepping up to leadership roles and [expressing] interest in directing. … Everybody’s talking about it.” Grindle’s positive about women working in shorts in the very near future. “I think it’s [going to happen] a lot sooner than it might have been if the industry hadn’t been talking about it.” As for Grindle herself, she’s already deeply involved in producing a new Pixar feature, but can only say that it’s one that people will be very excited about when it’s announced.

Pixar’s Inside Out may well clean up at the Oscars, but if you’re watching on Feb. 28, between the celebrity glitz of the big stars dressed to the hilt and the spotlight on this past year’s feature favorites, you might want to root for E’ville’s own Grindle and Patel, perhaps they’ll even make it up there to that most coveted of the world’s stages. 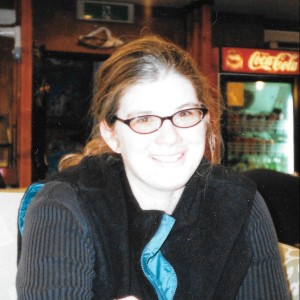 has zigzagged her way across Berkeley, SF and E'ville, landing in Oakland's Lakeshore with her spouse Sharon and 9-year-old son Dylan. She has written on amazingly accomplished women with an emphasis on film. She believes passionately in women's rights and lesbian visibility and hopes to see an end to police brutality and the achievement gap for children of color. Her articles have appeared on the SFgate and in Utne Reader, The Advocate and Curve Magazine.